Agenda - meetings will be on a Thursday of each month at 6:30pm at the Broadcast Studio

The Recycling Committee is collecting names, phone numbers, and email addresses of people who would be interested in purchasing a recycle bin(s) and/or a compost bin(s) later this year.  If you would like to be added to list, please fill out the form HERE.  Thank you! 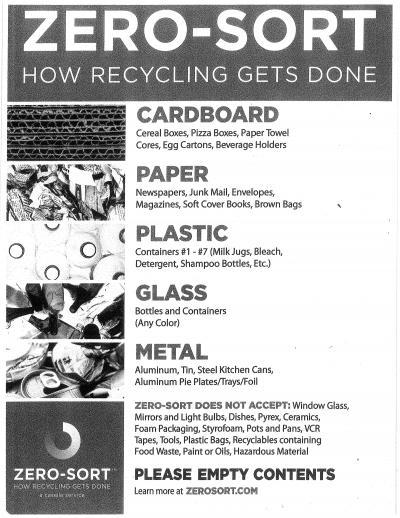 Raymond initiated single stream or zero sort recycling in July of 2010 at curbside. Participation increased significantly thus lowering Raymond's carbon footprint as it lowers gasoline usage for trucks, electricity for burning garbage and tipping fees. Raymond's initial participation was 56%. We encourage more residents to join in the recycle effort. We can do better. An advantage to Raymond residents is that any container can be used as long as the filled weight is not over 50 pounds. A second container can also be used. All plastics marked 1 through 7 as well as blister packs can be included, even broken plastic toys. NO styrofoam is recyclable even if marked. Broken down cardboard can also be included.

Tuesday, Thursday, Saturday & Sunday
7:00am to 4:45pm
Closed All Legal Holidays
The Town of Raymond no longer has a contract with Casco for use of their facilities but individuals can bring waste there for a nonresident tonage fee. Please see their website for more information.

Light bulbs go back to Home Depot, drugs to pharmacies, foam peanuts to UPS store in Windham. Metal can pile up and can be recycled on Riverside Street for cash or you can put it in your curbside recycle bin. Electronic recycling sites appear in our local papers periodically.

We recommend home composting of fruit and vegetables. Paper napkins can be shredded as well as paper towels or use cloth napkins and dishtowels to help reduce use of paper products. Composting does not smell or attract animals as there is no meat involved. Most people have found that recycles pile up quicker than garbage so that garbage can be put out every other week.

A map of the pickup schedule can be found on the Raymond web site under Public Works.

Garbage and recycles need to be out before 7am. or it could be missed.

One of our goals in 2011 was to increase recycling in both schools in the classrooms and cafeterias, as well as, home participation.

Meetings are the second Monday of each month at 7pm in the Broacast Studio located in the parking lot of the middle school.

2010 will be a year of big changes in Raymond’s program, as we move to a new, vastly improved recycling system! More about this after a summary of recycling activities in the past year:

When the new contract was put out to bid, the resulting proposals were only for the single-stream recycling option. The Selectmen also asked the winning contractor, Pine Tree Waste, for proposals to further reduce the costs of collection. This resulted in changes for pick-up on certain private roads that didn’t meet the standard for collection by a 26-ton truck.

The new contract means that the long-awaited upgrade to our recycling program will be coming in July! This is when the new system of ‘single stream’, or ‘zero sort’ recycling begins. No more sorting of recyclables will be necessary. In addition, more materials will be recycled curbside, and preparation of these materials will be minimal. The exact details will depend on which facility our materials go to, so those specifics will be forthcoming.
The new system, which should vastly increase our recycling rate, has advantages for us as a town as well as far beyond our borders. For example, recycling creates seven times as many jobs as normal waste disposal.

But the big benefit in the long run will be reducing our ‘carbon footprint,’ compared with burning our trash. The difference is huge! Recycling is just a part of the effort to slow climate change and its resulting economic impact. Thanks for all of your recycling efforts.

A Guide to Participating in Virtual Public Meetings

END_OF_DOCUMENT_TOKEN_TO_BE_REPLACED

Town Office Directory
Please be aware that the Town Office Extensions have changed. Please view our directory for more information.

Video Streaming
You can  now watch a LIVE STREAM of Raymond TV on your computer or mobile device by going here!

Raymond Parcel Maps and Assessing Data in Google Earth!
You can view an overlay of Raymond's property parcel maps in Google Earth with tax assessing data.

Raymond Village Library
Come see all that the Library has to offer from Children's Story Times, booksales, wireless internet, access to ebooks and MORE!

Volunteer Opportunities
View some of the openings that we have on government boards and learn other ways that you can help your local community!

There are currently 0 users online.